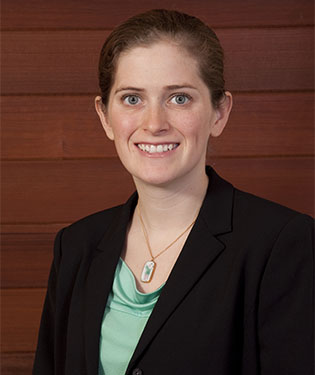 Megan Yarnall joined the firm in January of 2011 and became partner in 2017.  Her practice includes nursing home elder abuse and neglect cases on behalf of the elderly and disabled, personal injury, class actions, commercial fisheries regulation, and estate planning.

Born and raised in Humboldt County, Megan is licensed to practice in both Oregon and California as well as before the United States Patent and Trademark Office.  She is admitted to the U.S. District Courts in Oregon and the Northern and Southern Districts of California.

Megan received her B.S. with distinction from Harvey Mudd College in Chemistry and Environmental Studies.  She is a 2010 graduate of the University of Oregon School of Law (J.D., Order of the Coif, 2010) where she completed a concentration in intellectual property law.  While attending the University of Oregon, Megan served as an editor of the Oregon Law Review and the Western Environmental Law Update, and authored an article in the Oregon Law Review about the presentation of conflicting scientific expert testimony at trial.

Prior to joining Janssen Malloy LLP, Megan completed legal clerkships at a boutique intellectual property firm in Portland, Oregon and with the U.S. Department of Justice Environment and Natural Resources Division in Sacramento, California.